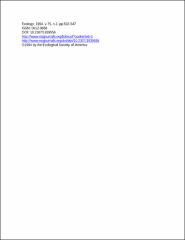 In northern Wisconsin lakes. the introduced crayfish 0rconectes rusticus is replacing 0. propinquus, a previous invader, and 0. virilis,a native crayfish. Herein, we explore how fish predation and competition interact to drive this change in crayfish species composition. In outside pools, we conducted selective predation experiments exposing crayfish to largemouth bass. Micropterus salmoides, to quantify patterns of crayfish vulnerability. To determine how interactions among crayfish influence susceptibility. we quantified shelter use and behavioral interactions among crayfish in aquaria and outside pools. At equal size, 0. virilis was more susceptible to fish predation than either of the invaders. 0. rusticus and 0. propinquus; the two invaders were equally susceptible to predation. However, sizes of these crayfish in the field are 0. virilis > 0. rusticus > 0. propinquus. Because fish predators prefer small crayfish. at unequal size, small 0. propinquus were more vulnerable to predation than large 0. rusticus. Thus, 0. rusticus can replace 0. propinquus due to natural size differences. Although 0. virilis grows larger than the invaders, it was more susceptible even when 3 mm larger. We hypothesized that 0. virilis, although large, participated in behaviors that increased its risk to predation. When provided with unlimited shelters, all three species increased refuge use under predatory risk. When shelters were limiting and fish present. 0. virilis was excluded from shelters by invaders. 0. virilis also participated in risky behaviors, such as increased activity and swimming. Both agonistic interactions with congeners and approaches by largemouth bass increased risky behaviors in 0. virilis. In addition, 0. virilis was innately less aggressive than invaders. Given these behaviors, 0. virilis was consumed at high rates and would be eventually replaced in lakes. In northern Wisconsin lakes, fish predation and crayfish-crayfish competition interact to influence crayfish replacements. Based on our results, largemouth bass predation modifies the outcome of interference competition among the three crayfishes and, in turn, competitive interactions among the crayfishes influence susceptibility to fish predation. We predict that 0. virilis should suffer high mortality to fish predation in the presence, rather than in the absence, of the two invading species. Our results support the hypothesis that, in areas of sympatry where predators are selective and prey species compete, predation and competition interact to determine community structure.

This project was supported through NSF grant BSR 8907691 to R. A. Stein in collaboration with David Lodge and Ken Brown.