Behavior of fish predators and their prey: habitat choice between open water and dense vegetation 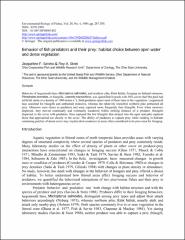 Behavior of largemouth bass, Micropterus salmoides, and northern pike, Esox lucius, foraging on fathead minnows, Pimephales promelas, or bluegills, Lepomis macrochirus, was quantified in pools with 50% cover (half the pool had artificial stems at a density of 1000 stems n^-2). Both predators spent most of their time in the vegetation. Largemouth bass searched for bluegills and ambushed minnows, whereas the relatively immobile northern pike ambushed all prey. Minnows were closer to predators and were captured more frequently than bluegills. Even when minnows dispersed, they moved continually and eventually wandered within striking distance of a predator. Bluegills dispersed in the cover with predators. Bass captured the few bluegills that strayed into the open and pike captured those that approached too closely in the cover. The ability of predators to capture prey while residing in habitats containing patches of dense cover may explain their residence in areas often considered to be poor ones for foraging.

Funding for this project was provided by Dingell-Johnson project F-57-R administered through the Ohio Division of Wildlife.