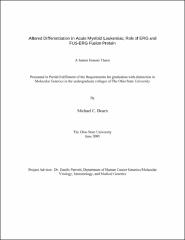 The FUS-ERG chimeric oncogene has been associated with fatal acute myeloid leukemias (AML) carrying the non-random t(16;21) (p11;q22) chromosomal aberration. In these leukemias, the presence of the t(16;21) translocation product FUS-ERG is associated with a) an increase in blasts with a round or irregular nucleus, basophilic cytoplasm, vacuoles and, occasionally, with phagocytosis features; b) the presence of micromegakaryocytes; and c) impaired myeloid differentiation with dysplastic neutrophils. Reportedly, ectopic expression of FUS-ERG in murine myeloid precursor (L-G) and in human cord blood cells induces changes which, in part, might account for the phenotype observed in t(16;21) AML patients. However, the FUS-ERG-dependent mechanisms underlying multilineage hematopoietic differentiation defects are still unclear. To understand how FUS-ERG affects granulocytic differentiation, we independently generated 32Dcl3-derived myeloid progenitor cell lines expressing HA-tagged ERG, FUS, and FUS-ERG oncoprotein. In the presence of the growth factor, IL-3, all cell lines showed similar proliferation rate without acquiring cytokine-independent growth. However, FUS and FUS-ERG, but not ERG, expression decreased the susceptibility to apoptosis induced by cytokine-deprivation in a dose-dependent manner. Interestingly, viable FUS-ERG-expressing cells (30%) were observed after five days in IL-3-deprived culture, whereas no parental cells were viable after 24 hours. Conversely, FUS-ERG-expressing cells showed enhanced proliferation and delayed differentiation when cultured in the presence of G-CSF, a growth factor important in granulocytic differentiation. By contrast, marked apoptosis was observed in G-CSF-treated FUS- and ERG-expressing cells. To dissect the FUS-ERG-dependent molecular mechanisms underlying altered differentiation, we assessed protein levels of G-CSF receptor (G-CSFR) and of the two major regulators of myelopoiesis, PU.1 and C/EBPα. Surprisingly, G-CSFR and C/EBPα, but not PU.1, levels were markedly increased in FUS-ERG-expressing cells but not in FUS- or ERG-transduced lines. Moreover, by microarray analysis we found that FUS-ERG expression specifically induced a) downregulation of genes either required for granulocytic differentiation or inhibiting G-CSF-induced proliferation; b) downregulation of pro-apoptotic and growth-suppressor genes and upregulation of positive regulators of survival and proliferation; and c) upregulation of genes that either promote megakaryocytic differentiation or are markers of differentiation into other hematopoietic lineages. Thus, it appears that FUS-ERG, rather than FUS or ERG overexpression, enhances survival and induces proliferation of myeloid progenitors by negatively affecting their ability to respond to differentiation stimuli.