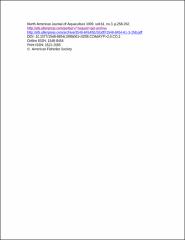 Effect of four extenders on the success of cryopreservation of the semen of muskellunge Esox masquinongy and yellow perch Perca flavescens was tested. These extenders consisted of 0.45 M sucrose and were supplemented with either (1) 15% dimethyl sulfoxide (DMSO), (2) 15% DMSO and 10% hen’s egg yolk, (3) 15% dimethylacetamide (DMA), or (4) 15% DMA and 10% egg yolk. The use of extender with DMA alone yielded only about 7% muskellunge sperm fertilizing ability after cryopreservation. Supplementation of this extender with egg yolk produced a fertilization rate (36.6% of the control where fresh sperm was used) not significantly different from rates obtained with extenders containing DMSO. No significant differences were found among particular pools (consisting of semen from three different males per pool) of muskellunge semen used in this experiment. Fertilization rates of cryopreserved yellow perch semen (range, 69.6% to 77.3%) were not significantly different among all extenders tested. Cryopreservation success differed significantly between milt samples from individual yellow perch males. Yellow perch eggs could be stored up to 77 min at 10C (fertilization success ranged from 57.2% to 64.8%). Our results provided 25–35% improvement of cryopreservation technology for yellow perch semen (measured as fertilization rate) and new data for cryoprotectant use in muskellunge. We were also able to prolong in vitro viability of yellow perch eggs during storage compared with earlier attempts.