A Look Into Goal Pursuit Moderated By Imagery Perspective 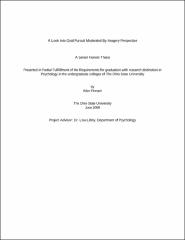