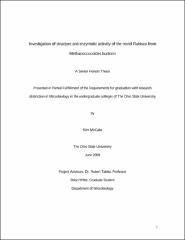 Ribulose 1,5-bisphosphate carboxylase/oxygenase (Rubisco) catalyzes the assimilation of carbon dioxide to organic matter. It is found in all domains of life, and is divided into four forms based on phylogenetics. The methanogenic archaeon Methanococcoides burtonii possesses a novel Rubisco whose sequence is intermediate between form II and form III. This enzyme is the first archaeal Rubisco shown in vitro to be aerotolerant. It also possesses a 26-residue "loop" structure that is unique among Rubisco proteins. It was found that deletion of this region significantly increases oxygen tolerance of the M. burtonii Rubisco in vitro. An in vivo expression system in Rhodobacter capsulatus was used to test the functionality of M. burtonii Rubisco. It was found that the Rubisco from M. burtonii is capable of physiologically significant carbon dioxide fixation. A mutant lacking the loop region was also functional in vivo, indicating that the expression system may be used in further studies concerning this novel structure.