Environmental tolerance of a H4N6 avian-origin type A influenza virus 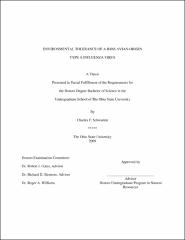 Detection of avian-origin type A influenza virus infections has been well documented within domestic and wild bird populations. However, research focused on the ability of these viruses to remain viable under naturally fluctuating environmental conditions, which we have termed "environmental tolerance" (ET), has led to untested hypotheses about the existence of an environmental viral reservoir. By measuring ET, we can determine the potential importance of an environmental reservoir. We developed three microcosms (soil, water, and water-soil interface) using soil, water, and field data collected from Waterfowl Lake at the Cleveland Metroparks Zoo during the summer of 2008 to construct a controlled environmental model quantifying the ET of influenza A viruses. Focusing on the effect of mean, minimum and maximum summer temperatures recorded in Waterfowl Lake, we spiked three replicates of each microcosm with a known quantity of a H4N6 avian influenza virus. An aquarium with soil and water that was not spiked served as a negative viral control for the microcosms. We hypothesized that there would be both qualitative and quantifiable differences in virus viability among our microcosms and temperature treatments. Samples were collected over four weeks and tested for the presence of viable virus using virus isolation in 10-day old embryonating chicken eggs. Surprisingly, viral infectivity generally surpassed four weeks. Therefore, we demonstrated that type A influenza viruses have sufficient ET to remain viable for at least 30 days in a pond under summer environmental conditions and concluded that ponds could serve as an environmental reservoir for influenza A viruses and should therefore be considered when managing bird collections. Currently, we are determining the mean egg infective dose concentration (EID50) of virus in our samples to attempt to detect quantitative changes in virus concentration over time.