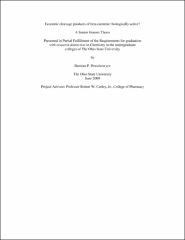 The most important role of beta-carotene has long been thought to be the metabolic cleavage at the central double bond to produce two molecules of vitamin A (retinol). There is growing interest in the "eccentric cleavage" of dietary carotenoids at different double bond sites of beta-carotene to produce apocarotenals and their possible oxidation to apocarotenoic acids. However, there are no careful, quantitative analyses of the levels of these compounds in human foods and tissues, and little is known of the enzymology of their formation. This project is part of a larger effort to characterize the full family of putative metabolites of beta-carotenes and lycopene, their occurrence, and their biological significance. We are synthesizing and characterizing all of the possible aldehyde and acid metabolites of beta-carotene for use as analytical standards and for direct assay of their biological activity. Multi-step syntheses were employed to synthesize many of the molecules. Nuclear magnetic resonance spectroscopy, UV-visible spectroscopy, high performance liquid chromatography, and mass spectrometry are being used for characterization. The laboratory of Dr. Earl Harrison (Dept. of Nutrition) is currently studying the interaction of the eccentric cleavage products with the nuclear retinoic acid receptors (RARs), which are responsible for cell differentiation and aspects of the immune response. The interaction of these molecules with other nuclear receptors will be analyzed in the future. The samples will also be used as standards to quantitate the concentrations of eccentric cleavage products in biological samples. The synthesis of the molecules prepared to date will be described as well as aspects of the limited biological activity data gathered to date.