The Effect of Training on Fricative Production in Second Language Speakers 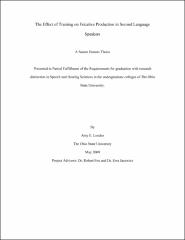 Speech produced by L2 (second language) speakers of American English can differ greatly from native speakers, largely due to the interaction of the phonetic characteristics of their native language and those of English in the L2 acquisition process (Flege, 1995). It is well known that native speakers of Korean have difficulties acquiring the English /s/-/ʃ/ fricative contrast, which depends largely on the position of the fricative in the word. In English, you can have both fricatives contrast in almost any phonetic context, but this is not the case in Korean. Previous research has examined the nature of this acoustic contrast in English with native adults and children; however, no such acoustic measures have been examined for L2 speakers. In addition, we do not know if short-term “training” on the fricative contrast will improve L2 productions (i.e., make the acoustic characteristics of these fricatives more similar to native English productions). This research project examines how well native Korean speakers improved their production of English fricatives after two training sessions which provided explicit instruction as to proper pronunciation of the fricatives in different positions in the word. Fricative productions by native English speakers served as a control. Results suggest that L2 speakers can significantly improve their pronunciation of English fricatives with very short periods of training.

This project was financially supported by the Department of Speech and Hearing Science at The Ohio State University.