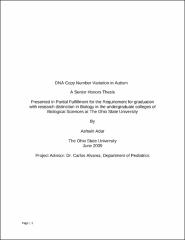 Autism is a childhood neurodevelopmental and psychiatric disorder that involves the impairment of social skills and communication. The genetics behind the inheritance and susceptibility of this disorder are not well known but have recently been studied. Lately, DNA Copy number variation (CNV) in autistic individuals has been a topic of high interest, and has been shown to have an association with this disorder. CNV generally refers to differences in the germ line DNA content between individuals. CNVs span from 1-kb to multi-megabases, and represent a significant portion of genetic variation in normal humans. Significant work has been done in the field of Autism Spectrum Disorder (ASD) genetics to find CNVs implicated in the development of autism and the variation of phenotype. In order to identify new disease alterations, we are conducting CNV discovery studies on 10 autistic children and their families. We expect our findings will lead to a better understanding of pathophysiology and to new avenues of therapeutic treatment. We conducted CNV discovery in 10 autistic children using array Comparative Genome Hybridization (aCGH) on a tiling-resolution whole genome BAC microarray. This platform can detect CNVs >50-kb. From the high confidence CNV calls (based on standard deviation and signal-to-noise Ratios), we filtered out all variants that are found in 4% or more of normal individuals. We have identified over 100 high confidence candidate CNVs that have rarely or never been reported previously. In addition, we have begun to determine if any variants were created de novo in the affected child (i.e., were not inherited from parents). Some candidate de novo variants span many genes and could have functional effects. We conclude that it is worth conducting more genome-wide CNV discovery in autism, and testing suggestive CNVs for association in large numbers of autism patients.