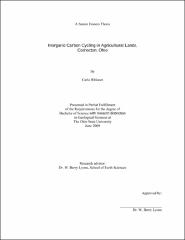 Alkalinity, or the dissolved inorganic carbon species from chemical weathering exported from soils to streams, is a measureable representation of one of the terrestrial sinks for atmospheric CO2. Fluvially transported alkalinity, derived from soils, can be used to help characterize land management methods and improve future conditions to sequester carbon. This study focuses on how the different land uses affect inorganic carbon (i.e. alkalinity) exportation. The North Appalachian Experimental Watershed, in Coshocton, Ohio is composed of several small watersheds with different agriculture land uses, such as pastured, forested, mixed, no-tillage crops, and tillage crops. During October 2008 to April 2009, water samples were collected from five different watersheds and alkalinity measurements were made during baseflow and stormflow conditions. Baseflow alkalinity yields were nearly indistinguishable among land use types. Carbonate speciation calculations showed the primary species, on average, in all of the water samples to be bicarbonate. Stormflow at the tilled and non-tilled sites showed that the tilled land use exported at least twice the amount of alkalinity than the non-tilled land at times of high flow. Tillage practices release inorganic carbon and ultimately may be a source for atmospheric CO2.