Attitudes, Beliefs, and Perceptions of Intimate Partner Abuse in a College Sample: Results of a Pilot Study 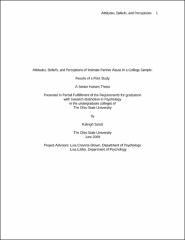 This study examined Ohio State students’ thoughts and feelings regarding the issue of intimate partner abuse (IPA). Items specifically assessed beliefs about which behaviors constitute abuse, agreement with myths and recognition of facts about IPA, perceptions of the frequency and severity of abuse among OSU couples, prior and current experiences as a victim of IPA, and willingness to intervene in a violent scenario or associated reasons for not taking action. Students in our sample were less likely to define items of a psychological/nonverbal nature as abuse, and victims were less likely to rate a variety of items as such. Also, the overall sample agreed more with facts than with myths about IPA, but there were important differences observed between genders and victims/non-victims on these items. Furthermore, the majority of students indicated that they would take some form of action if overhearing a violent episode, but many also said they would feel reluctant due to concerns about escalation and lack of adequate knowledge regarding how to handle such a situation. Analyses of correlations, implications for education and awareness efforts, and directions for future research are discussed.