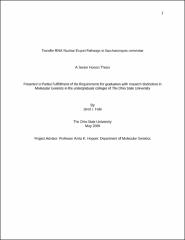 tRNAs are small RNA molecules that function by delivering amino acids to the ribosome during translation. The focus of this work is to understand how tRNA moves from its site of synthesis in the nucleus to its site of function in the cytoplasm in yeast. The β-importin protein family member, Los1, binds to end-processed tRNAs in the nucleus and exports them to the cytoplasm. However, since Los1 is unessential, additional nuclear export tRNA pathways must exist. Our lab has identified two additional β-importins, Msn5 and Crm1, which cause tRNA nuclear accumulation when mutated. This study seeks to determine if Los1, Msn5, and Crm1 are the only proteins involved in tRNA nuclear export? Towards this goal, I have constructed yeast strains bearing multiple mutations of the known genes. Should the crm1-1 msn5Δ los1Δ triple mutant be viable, it will suggest there are other unidentified tRNA nuclear pathways. However, if the triple mutant is not viable, then possibly Los1, Msn5, and Crm1 are the only tRNA export pathways. Previously, the los1Δ msn5Δ double deletion was determined to be viable. The crm1-1 msn5Δ and crm1-1 los1Δ double mutant are viable and, interestingly, they both display increased temperature sensitivity when compared with either single mutant or the los1Δ msn5Δ double mutant. Therefore, the crm1-1 mutation coupled with the deletion of los1 or msn5 likely further impairs the export of tRNA from the nucleus. Because the double mutants are viable, I am constructing the triple crm1-1 msn5Δ los1Δ mutant.