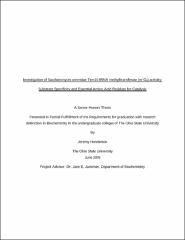 Trm10 catalyzes N-1 methylation of G9 (m1G9) for at least 10 tRNA species in S. cerevisiae, including tRNAGly. However, at least 12 yeast tRNA species, including tRNAVal and tRNALeu, have an unmodified G9, and the sequence elements that define tRNA substrates for Trm10 are unknown and are not obvious from simple sequence comparison. To investigate Trm10 tRNA substrate specificity, we have developed a sensitive assay using site-specifically labeled Gly, Leu and Val tRNAs. Consistent with the in vivo methylation pattern, tRNALeu is not a Trm10 substrate, yet surprisingly, both tRNAGly and tRNAVal are substrates for m1G9 modification in vitro. A comparison of steady-state kinetic parameters for Trm10 activity with tRNAVal and tRNAGly reveals that kcat /KM, an indicator of substrate specificity, is nearly identical for both substrates. Therefore, these data suggest that Trm10 must use additional mechanisms to distinguish between some tRNA substrates in vivo. Since the mechanism by which Trm10 methylates tRNA is unknown and there is no identifiable sequence homology between Trm10 and other methyltransferases, it is important to identify Trm10 residues that participate in catalysis. We have investigated the role of several highly conserved Trm10 residues by mutagenesis of these residues to alanine, revealing at least 8 amino acids that appear to be important for catalysis, based on significantly decreased methylation activity observed for each variant, and at least 2 amino acid residues that appear to be important for substrate recognition, based on similar methylation activity of these two variants with Gly and Val tRNA substrates. The identification of these residues is a necessary and important first step toward determination of the molecular basis for Trm10 m1G9 activity, a potentially novel methyltransferase enzymatic mechanism.