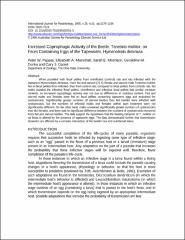 When provided with fecal pellets from uninfected (control) rats and rats infected with the tapeworm Hymenolepis diminuta, more fed and starved (72 h) female and starved male Tenebrio molitor fed on fecal pellets from infected- than from control rats; compared to fecal pellets from controls rats, fed males avoided the infective fecal pellets. Uninfective and infective fecal pellets had similar moisture contents, so increased coprophagic activity was not due to differences in moisture content. Fed and starved males and females were fed on fecal pellets containing tapeworm eggs and examined for cysticercoids. Significantly greater numbers of starved beetles than fed beetles were infected with cysticercoids, but the numbers of infected males and females within each treatment were not significantly different. On the other hand, males contained significantly greater numbers of cysticercoids than did females, and there was no significant difference between the numbers of cysticercoids recovered from fed and starved beetles. The data support the hypothesis that the feeding behavior of T. molitor on rat feces is altered by the presence of tapeworm eggs. The data demonstrated further that transmission dynamics are affected by a complex interaction of the beetle's sex and nutritional status.