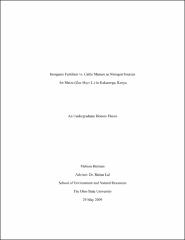 Despite worldwide efforts, Sub-Saharan Africa’s (SSA) food security has not improved since 2000 when the United Nations published its Millennium Development Goals. There are many reasons, but inconsistent and inefficient soil management by farmers is a major contributing factor. Maize (Zea Mays L.) is one of the major staple foods in Kakamega, Kenya, a large agriculture community located in Kenya’s Western Providence. Nitrogen (N) is an essential nutrient for plant growth and a limiting factor affecting crop yield. However, fertilizer is often unavailable to farmers due to high prices, and manure is not available in sufficient quantity and at appropriate times. Therefore, the objective of this study was to compare organic and inorganic sources of N in relation to maize yields and soil quality in Western Kenya. The project began in April 2007 when the maize was planted at four farm locations within the Kakamega District. Cattle manure was applied to half of the plots at each farm site, and inorganic fertilizer was applied to the remaining plots, both in accordance to nutrient recommendations from the Kenya Agricultural Research Institute’s (KARI) Regional Research Center in Kakamega. The N rate from the inorganic fertilizer was equivalent to the dry-weight rate of total-N applied in the cattle manure, allowing for a direct comparison. The data on soil, plant analyses, and crop yields showed that inorganic fertilizer produced grain yields 68% higher than that from manure. However, yields were low. Analysis of maize leaves at initial silking stage showed that many nutrients were below the critical levels. Further estimates show that up to twice the amount of N applied to the field is exiting the field via maize grain and stover, thereby creating a negative nutrient budget. For these reasons, it can be concluded that the recommended N rate of 50 kg/ha is not enough to either sustain crop yields or restore the degraded soil systems.