Language Attitudes Toward Devoicing Among Young Adults in Buenos Aires 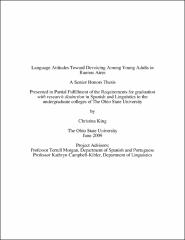 Language is a vital tool in gaining insight into social structures and organization. Often times, we as humans make judgments about others based on how they speak. The purpose of this study is to examine the social connotations that surround the sounds [ʒ] (as in leisure), and [∫] (as in shock), represented orthographically by the letters “y” and “ll”, in the Spanish of young Argentines in Buenos Aires. Recently, a trend in devoicing has been noted in Buenos Aires Spanish where the sound [ʒ], the voiced variant, is gradually being replaced by [∫], the voiceless variant. Fontanella de Weinberg (1978) carried out one of the first quantitative studies and classified which groups of speakers used which variant. Her study showed that the trend in devoicing began among young females in Buenos Aires. Current studies have shown that in addition to age and gender, social class is significant to devoicing (Rohena-Madrazo 2008). The goal of this project is to determine whether or not people from Buenos Aires can distinguish between the voiced and voiceless variants and if they can, what opinions they may have about people who use each variant. This project is based on nineteen interviews conducted in the summer of 2008. The participants include young adults ages eighteen to thirty that are natives of Buenos Aires and have gone to college or are currently in college. There are nine female and ten male participants. Each interview consisted of background questions, listening to and identifying the pronunciations of three speakers, making judgments about those speakers, and self-assessment. The acoustic analysis of six participants’ speech confirms the general trend of devoicing and, interestingly, shows that one participant produced more voiced tokens as the interview progressed. The perception results from these interviews show that the distinction between the voiced and voiceless variants is perceived by twelve of the nineteen participants. Often, the participants that were natives of an area outside of the city limits of Buenos Aires did not perceive the distinction. Among the participants that did recognize the distinction, there was a variety of attitudes or opinions expressed. Explicit statements were made that linked the variable to both age and social class. Specifically, a few participants believed that [ʒ] marked older age, while others thought that it was indicative of those of the upper class. The participants talked about the voiced and voiceless variants in different ways, often showing either a negative or positive stance towards one or both of the variants, as well as using the variants to talk about and position themselves. The results prove that the distinction between [ʒ] and [∫] is salient for some young people in Buenos Aires and that it is used in different ways to make judgments about others and to construct identity.

Arts and Sciences, Arts and Humanities, Spanish and Portuguese, Linguistics