Identity, distinction, and action: Re-evaluating the self in the work of Taylor, Foucault, and Arendt 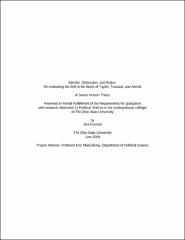 In all its conceptions, identity is the connection between the self and the world, it shapes how one enters that world and determines the manner in which one addresses and is addressed by a given community. Given this importance of identity to making sense of worldly experiences, it seems that the framework and the vocabulary used to discuss identity are, too, very important. Yet the modern age, with its Romantically-inspired idealization of the individual has embodied this thirst for recognition in a self-project, as suggested by Charles Taylor, whereby one must recover her own authentic identity or risk missing out on a uniquely fulfilling life. While this identity quest has come under criticism, notably by Michel Foucault, as being a manifestation of the normalizing social power of a given community, I argue that both Taylor and Foucault, while seemingly at great odds, are instead trapped within the same de-politicized framework of self-obsession that necessarily precludes them from any significant success. Using the conceptions of action and identity from the work of Hannah Arendt, it becomes clear that identity can only ever truly make sense as it is revealed through action, in the name of self-forgetting, within the public-political realm, thereby exposing the modern fixation on one’s own identity as a damaging misconception.