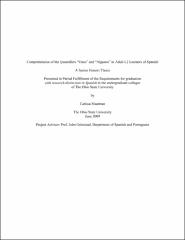 While there is discussion concerning the extent of second language (L2) learner access to Universal Grammar, less is known about L2 learner abilities for developing target-like pragmatic competence. One prominent theory (Sorace 2000, Sorace & Filiaci 2006) argues that constructions at the syntax-discourse interface should be the most difficult to learn. In a series of Truth Value Judgment tasks, we explore the ability of native speakers of English, learning Spanish as a second language, to develop a target-like competence using the pragmatic implicatures associated with the existential quantifiers unos and algunos. In both languages, there is an existential quantifier that may be pragmatically enriched with a “some, but not all” interpretation: some in English, algunos in Spanish. This conversational/pragmatic implicature may be canceled in downward-entailing environments, such as the antecedent of a conditional sentence, and is signaled in English through intonation on a single lexical item. In contrast, Spanish uses two separate lexical items to create the same meaning. Existential quantification that is not subject to pragmatic enrichment also shows cross-linguistic variation. Spanish uses unos, which does not carry the implicature in discourse-novel contexts, whereas English uses a phonologically-reduced form of some, which we spell sm (cf. Postal 1964, Milsark 1977), for this expression. The overall difference seems related to the fact that English signals the “some, but not all” pragmatic implicature by an L+H* pitch accent, unlike Spanish. Although unos and algunos are not phonologically-reduced, L2 learners of Spanish may erroneously conclude that, by lacking an L+H* pitch accent, neither quantifier is pragmatically enriched. Since Spanish and English differ in their expression of existential quantification, target-like use cannot be acquired correctly in L2 Spanish by transfer from English alone, as proposed by the “transfer” dimension of the Full Transfer-Full Access theory of Schwartz & Sprouse (1996). It would seem that the “Full Access” dimension of this theory makes no claims to linguistic pragmatics, which may lie outside the scope of grammar. Data collection is ongoing, but preliminary results suggest that L2 learners are not able to learn target-like pragmatic implicatures, supporting Sorace’s (2000, Sorace & Filiaci 2006) theory.