Ordinary Germans or Willing Killers: Klemperer and the Goldhagen Debate 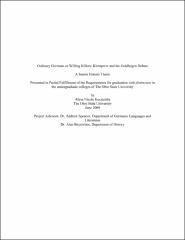 Since German reunification in 1990, a host of explanations for Germans’ participation in the Holocaust has been debated, but none have been so controversial as those debated between Christopher Browning and Daniel J. Goldhagen. In his book Ordinary Men: Reserve Police Battalion 101, Browning argues that many factors contributed to the perpetrators’ motivations, while Goldhagen maintains in Hitler’s Willing Executioners: Ordinary Germans and the Holocaust that eliminationist antisemitism is the only plausible explanation for the perpetration of the Holocaust. Both of these men have examined the same source material in great detail, yet they have come to two extremely different conclusions. This thesis examines the Nazi era diaries of Victor Klemperer, a German Jew who lived in Dresden, in order to determine what side of the Goldhagen/Browning debate holds more credence. Klemperer kept detailed daily accounts of his life during the Nazi period, and I have studied these accounts and compared them to both Browning and Goldhagen’s arguments. From evidence in Klemperer’s records, I argue that Goldhagen’s theory of eliminationist antisemitism cannot be the sole explanation for Germans’ involvement in the Holocaust and cannot be applied to all Germans. Rather, the diaries show that a number of factors in addition to antisemitism contributed to the Germans’ facilitation of the Holocaust, namely Nazi antisemitic propaganda, fear and psychological pressure, and both social and legal isolation of the Jews. I conclude that while Goldhagen is correct in that antisemitism was necessary for the Germans to facilitate the Holocaust, it was not sufficient, and that Browning’s multi-causal explanation reflects what Victor Klemperer witnessed. Thus, this thesis provides evidence for a better understanding of Germans’ complex motivations during the Nazi period.