The History of the Jamestown Colony: Seventeenth-Century and Modern Interpretations 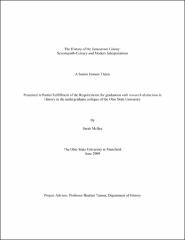 The Jamestown colony was founded in Virginia in 1607, eventually becoming the first permanent English settlement in North America. Even though this was an important moment in American history, Jamestown nevertheless suffers from an image problem often due to comparisons with other colonies deemed more worthy and successful, such as that of the Pilgrims at Plymouth. The purpose of this study is to analyze what historians have been saying about Jamestown over the four hundred years since its founding, particularly comparing how people were writing about the colony shortly after its establishment and how scholars view the colony today. For example, four primary criticisms of the colony surface repeatedly - that the colony was established in the worst possible location; that the Englishmen were inept and foolish in their dealings with the natives; that the colonists were lazy and unfit for work even in the interests of self-preservation; and that Jamestown was a death trap, with staggering and unnecessary mortality rates. My goal is to understand why Jamestown has been dealt such a poor reputation, both in print and in our collective American consciousness. This study concludes by highlighting some of the important events associated with Jamestown that are often overlooked, such as the first representative government on the continent and the first private land ownership, as well as the archaeology currently underway at the site of James Fort, which is continually changing the traditionally negative views of the colony. Without an accurate understanding of where we came from, we are less capable of knowing where we are headed. It is on this basis that I reevaluate Jamestown utilizing primary documents and archaeological evidence, in the hope that Jamestown can be understood on its own terms.