The Effects of Training on Intelligibility of Reduced Information Speech Stimuli 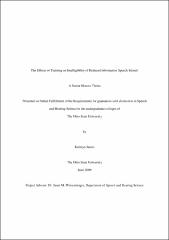 Although it is well known that individuals use visual cues to supplement hearing in noisy environments, research shows that we use visual cues even when the auditory signal alone is perfect. Speech perception is a multimodal process that uses both auditory and visual inputs on a continuous basis. Recent research has focused on the benefit listeners receive from visual input when the auditory input is compromised in some way. One method of reducing information was initially used by Shannon and his colleagues, in which fine structure information was removed from speech syllables and replaced with band limited noise, while the temporal envelope was preserved. Results showed that stimuli were still identifiable even when these stimuli are reduced to two or three broad spectral bands. However, other forms of auditory signal degradation, even though they yield good intelligibility in sentences, are much more difficult to identify as isolated syllables. One example is sine wave speech, in which the speech signal is reduced to a series of three sine waves that follows the formant frequency of the speech. Nonetheless, Exner showed that the intelligibility of sine wave speech syllables can show improvement with training. To date, no studies have been performed to determine whether stimuli similar to those employed by Shannon would also show improvements with training, or whether the level of performance observed reflects asymptotic intelligibility levels. The present study evaluated the effects of training on performance with stimuli similar to those used by Shannon. To accomplish this, five listeners in the present study received 10 hours of auditory training with reduced-information speech syllables. Results showed significant improvement across training sessions for auditory-only performance, but a reduction in audio-visual integration after training. Implications for aural rehabilitation programs are discussed.