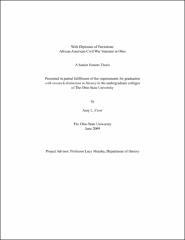 In the past two decades, historians have begun to focus attention on the story and struggle of the more than 186,000 African American men who served in the Civil War. While scholars have produced books such as Forged in Battle and Black Soldiers in Blue which have greatly advanced knowledge about the role of these men during the war, relatively little has been written about what happened to these men after they returned home. This study examines three groups of men living in Springfield, Ohio: African American Civil War veterans, white Civil War veterans, and African American non-veterans. Springfield was chosen because of the size of its African American population, its profile as an “average” Ohio city in the late nineteenth century, and the availability of records. The results of this study are surprising. The African American veterans fared worse than the white veterans. However, the black veterans fared no better—and sometimes much worse—than the African Americans who did not serve in the military. As a whole, military service did not significantly improve the lives of the African American veterans in Ohio.