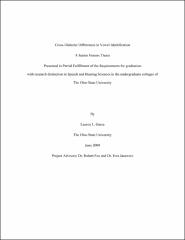 The acoustic vowel space of one dialect of the American English language compared to another is often systematically and significantly different. Usually, these dialects will have the same basic set of systematic phonemic distinctions among vowels. It is the pronunciations of this same set of vowel phonemes that differs from one dialect to another. What has not been studied is individual listener’s ability to distinguish their native dialect from another similar. This research study examines two Midwestern dialects of American English. The dialects of Central Ohio and of Southeast Wisconsin have many similarities in regards to vowel placement. However, they differ (in terms of their “acoustic vowel spaces”) in that the Wisconsin dialect is undergoing what is called the “Northern Cities Shift” in which several vowels have jointly shifted from their positions in the F1 by F2 acoustic vowel space as found in the Ohio dialect. Using a customized MATLAB computer program, two perception tests were developed in order to test Central Ohio listeners’ ability to differentiate their native Ohio dialect from that of Wisconsin. The stimulus vowels in this perception test were produced by both male and females speakers ranging in ages of 8-12, 35-50, and 66+ from both dialects. The listeners, all of which are between the ages or 20–35 and have been born, raised, and spent the majority of their life in Central Ohio. The first test required listeners to identify the vowels, produced in the [h_d] format (labeled with the words: heed, hid, head, hey’d, had, hod, who’d, hood, hoed, heard, hide, hawed). The second test required listeners to identify the dialect of the speaker based only on the single stimulus item. The results will be discussed in terms of similarities and differences in the confusion matrices between different dialects.

Second Place in the category of Speech and Hearing Science, Education, and Business at the 2009 Denman Undergraduate Research Forum

This work was supported by the research grant No. R01 DC006871 from the National Institute of Deafness and Other Communication Disorders, National Institutes of Health. This work was also supported by Undergraduate Research Scholarships from the College of Arts and Sciences and the College of Social and Behavioral Sciences at The Ohio State University.