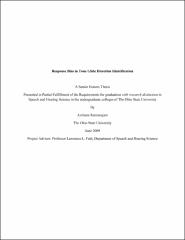 The average human listener has no difficulty encoding speech. Speech sounds are the different patterns of resonance in the vocal tract identified as formants. Formant transitions, rising or falling in frequency, are fundamental to the understanding of speech. Two previous studies reported that listeners are able to identify the direction of rising frequency sounds more accurately than those falling in frequency. However, the earlier studies did not measure or control for response bias. That is, the possibility that listeners simply respond “Up” more often than “Down” when they are uncertain about their perception. In this experiment, frequency modulated (FM) tone glides were used rather than the formant characteristic in speech. Four young adults between the ages of 18-22 with normal hearing performed the task of listening to a frequency-modulated tone. They then had to decide if it was a rising or a falling tone. The actual frequency of the tone was randomized so that a response could not be made based on the starting or ending frequency of the tone. An adaptive tracking procedure was used to determine the glide duration for which a listener could achieve: 62.5 percent, 75 percent, or 85.5 percent correct when they were asked to report the direction of the frequency change. The adaptive tracking task, Single Interval Adjustment Matrix, SIAM, is designed to counteract response bias in these listening tasks. Each percentage was tested with three center frequencies: 734, 1224, 2449 Hz. This experiment examined if all four subjects were able to recognize rising frequency glides with better accuracy than falling frequency glides at all three center frequencies. In addition to this experiment, another experiment was run to compare the data from the same subjects. The second experiment replicated the Dawson experiment which did not control for response bias. The data from the two were compared to eliminate any individual differences. This experiment used a statistical analysis to see if the previous findings were in fact true or if there is a response bias from listeners.