Toward the synthesis of the deuterated finland trityl radical 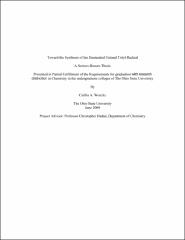 Recently, there has been considerable interest in developing soluble radical probes for bio-imaging applications, such as the EPR detection of tumors and protein distribution assays. The Finland trityl radical has previously been exploited as such a probe, but the sensitivity for detection of this probe is significantly compromised due to coupling of the radical electron spin with the nuclear spin of the methyl hydrogens of this species. To improve the sensitivity of this probe in biological imaging applications, this work describes our efforts toward the synthesis of a deuterated analogue of the Finland trityl that lacks the possibility of such hyperfine coupling and is anticipated to have a sharpened EPR signal. The synthetic scheme consists of six steps, based on a modified procedure of Reddy et al. Our best efforts have led to a 92% deuterated precursor of the Finland trityl. Advisor: Dr. Christopher M. Hadad