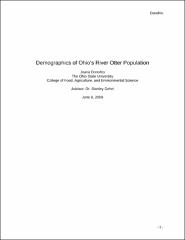 Historically, river otters (Lontra canadensis) were abundant in aquatic systems throughout the country. By the 1830’s, river otter numbers had been drastically reduced due to unregulated trapping and habitat destruction. By 1977, otters had been reduced to 75% of their historical range and completely eradicated from several states, including Ohio. Improved conditions in potential otter habitat, along with concern over the severe decline of this species led many states to develop plans to restore otter populations. From 1986-1993, Ohio implemented its own reintroduction plan in which 123 river otters were released at four locations in Eastern Ohio. Since 1993, the Ohio Division of Wildlife has used various methods to monitor the otter population and has documented otter presence in 67 of Ohio’s 88 counties. This perceived abundance of river otters led management authorities to implement a harvest as a way of controlling population growth and mitigating conflicts. However, more information on Ohio’s river otter population is needed not only to ensure the continued success of the reintroduction program, but also because river otters are listed as an Appendix II species by CITES. The goal of this research was to use carcass data including sex, age and reproductive rates from three harvest seasons (2005-2008) to determine the age distribution and sex ratio of the otter population. The data was used to create a life table and estimate the population growth rate. The observed age structure of harvested otters was also compared to that predicted by a population model created in Missouri to project the growth of an otter population following reintroduction. From 2005-2008, data was collected from 468 otters. The sex ratio did not differ significantly from a population with a 50:50 male to female ratio. The age distribution showed a higher proportion of younger animals which is consistent with a growing population. The percentages of females exhibiting reproductive activity by age class were 6.4% pups, 46% yearlings, 57% 2-year-olds and 71% of adults. Litter sizes averaged 3.19 young per parous female (n=57). Population growth as determined by a life table was R0=1.54, which also indicates a growing population. Comparing the observed proportions of pups, yearlings and adults from each year and the expected proportions predicted by the Missouri Model resulted in similar percentages. These results indicate a stable age distribution and constant growth rate. We concluded that a limited harvest does not seem to be negatively impacting Ohio’s otter population.