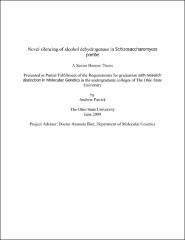 Non-protein coding RNAs (ncRNAs) have emerged as a significant factor in gene regulation. In this thesis, we have studied the expression profile of the Schizosaccharomyces pombe gene alcohol dehydrogenase 1 (adh1+). Adh1 is an abundant zinc binding protein that is repressed in low zinc in order to conserve zinc for other cellular processes. We have found that adh1+ is repressed in response to severe zinc deficiency, and the repression correlates to expression of an antisense transcript larger than the gene. When we expressed adh1+ constitutively from the nmt1+ promoter, we found that this did not affect the zinc-mediated regulation of adh1+. In addition, artificial repression of the sense transcript did not prevent zinc-mediated regulation of the antisense transcript. The regulation of this locus by zinc was studied over time, and it was determined that the sense transcript is fully repressed by four hours, but it is not yet known whether the sense and antisense transcripts are mutually exclusive.