Cultural Translation through Poetry and Painting: Gary Snyder and Brice Marden in Dialogue with Han-shan 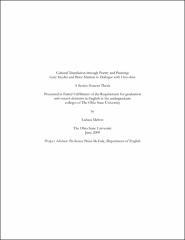 This paper discusses the value of cross-cultural and cross-media translations, specifically looking at Han-shan's Tang-dynasty era "Cold Mountain" poems. Gary Snyder, American poet, translated 24 of these poems in the mid-nineteenth century and Brice Marden, American painter, produced a series of 6 large-scale paintings based on the same set of poems. Ultimately, these works reveal more about the translator than the original author, more about the West than the East.