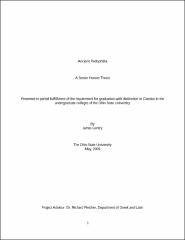 Despite the significance of ancient sexuality in modern debates, from the work of Michel Foucualt to Romer v. Evans, there has been little discussion of the use of ancient sources by certain modern groups, like the North American Man/boy Love Association (NAMBLA), to legitimize pedophilic practices as a form of modern pederasty. Although other movements have used these materials for legitimization, I argue that groups such as NAMBLA do so incorrectly both in regard to the ancient sources they claim to be reborn and in the context of modern society in which there are serious ramifications for their actions with, and their desire for, children. This argument is based around the definitions of both pederasty and pedophilia, the discourse of pederasty in antiquity, the impossibility of its existence in the modern world and the discussion of pedophilia in the modern world with its existence in antiquity. The conditioning factors which increase the prevalence of pederasty and/or pedophilia are also discussed in the context of ancient Greece, ancient Rome, and modern society; these factors include: the subjugation or rise in power of women, the process of citizenship, and the education of children in antiquity. In writing this paper I hope to disprove hereafter any claims by modern pedophiles that they are the pederasts of ancient Greece reborn.