From Poe to Rimbaud: A Comparative View of Symbolist Poetry 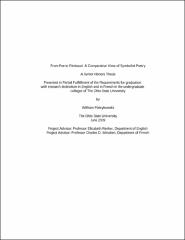 Though geographically isolated from each another in the Nineteenth Century, Walt Whitman, Edgar Allan Poe, and their French contemporaries, Charles Baudelaire, and Arthur Rimbaud, worked analogously to revolutionize poetic representation. Baudelaire and Rimbaud worked in the Symbolist tradition, while Whitman and Poe stood together in the United States as revolutionary thinkers in their own rights. In attempting to define Symbolism in her book, Whitman among the French, Betsy Erkkila cites Baudelaire’s definition of modern art from the article “L’Art Philosophique” as “C’est créer une magie suggestive contenant à la fois l’objet et le sujet, le monde extérieur à l’artiste et l’artiste lui-même (56). This definition, as indicative of Symbolism more largely, suggests the use of evocative, but often fleeting forces to explore the artist’s outer, socialized world, with a boundless, internal space. Working in similarly suggestive, and often allusive, natures, Whitman and Poe worked analogously as American poets to the French. As this parallel exists between these writers, one must ask just how comparable they actually are, and if they exerted any force on each other’s works. Most critics agree Poe was most likely more influential to the formation of Symbolist thought, while Whitman’s force is a bit more unclear. As critic P.M Jones references of French critic Teodor Wyzewa in regards to Whitman’s poems, “ils n'ont exercé sur le mouvement littéraire contemporain aucune influence ou à peu près”(Whitman in France, 24), while Wyzewa also concedes to “l’énorme influence de Walt Whitman sur notre mouvement littéraire contemporain.” Working from this contradiction, along side of the complimentarily bonding elements of allusiveness and suggestiveness in all authors’ works, I plan to ultimately explore in From Poe to Rimbaud, a Comparative View of Symbolist Poetry American importance in the formation and development of French Symbolist poetry. The first portion of this paper will be devoted to two specific examinations: the relationship between Poe, Baudelaire, and the formation of Symbolism followed by the relationship between Baudelaire and Whitman as comparably revolutionary poets. The main works to be examined will be Whitman’s Leaves of Grass, Baudelaire’s Les Fleurs du Mal, and Poe’s The Facts in the Case of M. Valdemar. As Baudelaire translated Poe’s before mentioned texts into French, they will also be read from his translations. In addition to these texts, critical works by P.M Jones from The Modern Language Review, Betsy Erkkila from Walt Whitman Among the French, Marcel Françon from Poe et Baudelaire, P. Mansell Jones from Poe, Baudelaire and Mallarmé: A Problem of Literary Judgement, Albert Schinz’s Literary Symbolism in France, and Mathurin Dondo’s Les Premiers Poètes du Vers Libre Anglais will be used. Specific issues to be handled at this juncture will be the use of free verse as a revolutionary writing mechanism, representations of body imagery as pertaining to sexuality in society, and the restructuring of social control conventions. Using these themes in both French and American traditions, a deeper understanding will be established to show why French Symbolism is neither Poe nor Whitman’s school of thought, but why Symbolism could perhaps not truly exist without their influence. The second part of From Poe to Rimbaud…will focus on later Symbolist writer, Arthur Rimbaud in comparison to Walt Whitman. Primary texts will be poems from Rimbaud’s Une Saison en Enfer and, Illuminations. Secondary texts will be critical works by M. Teodor de Wyzema, M. Sarrazin, Madame Bentzon, M. Francis Vielé, along with Mathurin Dondo’s Les Premiers Poètes du Vers Libre Anglais. Along with Verlaine’s and Rimbaud’s implementations of Symbolist ideals, the use of free verse, or vers libre, as used by the French will again be discussed to more deeply bond both French and English poetic traditions. In order to equitably share the work load between the French and English languages, the majority of research will be conducted in French while the thesis as a whole will be written in English, with the exception of French citations. All texts which were originally written in the French language will be analyzed from their original states. Charles Minahen of the French department will aide in the process of working with French texts, while Elizabeth Renker of the English department will work in English translation of the French works, and also assist in the dealings with Poe and Whitman in English. Translations from French to English, in specific poetic and secondary source citations, will be provided by the student. At the conclusion of From Poe to Rimbaud…I hope to show the importance of French Symbolism’s particularity to France as it is strongly bonded to, and perhaps inextricable from, revolutionary American thought. For as poets in both cultures sought new ways in which to view themselves and society, they eternally bonded both poetic cultures in their effort to define what it meant, and still means, to be everlastingly human.