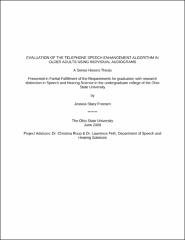 After experiencing an influx of challenging telephone conversations with elderly individuals with hearing loss, counselors at the Franklin County Ohio Office on Aging called upon researchers in the Departments of Speech and Hearing Science and Electrical and Computer Engineering at The Ohio State University. They developed a Telephone Speech Enhancement Algorithm (TSEA) to help hearing impaired, older listeners with telephone communication problems. The TSEA is based on a hearing aid compression strategy. Specifically, the algorithm processes speech signals by applying amplification to soft sounds (e.g. consonants) without amplifying louder sounds (e.g. vowels) (Roup et al., In Review). This type of processing is known to improve speech understanding for those with hearing loss. The algorithm has been tested and revised over the past several years and is now implemented in a “real-time” format using technology developed in collaboration with FutureComm located in Gahanna, Ohio (Harhager, 2007). Past studies focused on an average audiogram, or default TSEA, derived from a set population of patients from the Columbus Speech and Hearing Center between 1996 and 2000. For this particular study, the goal was to test the significance of applying ten subjects’ individual audiograms to the TSEA as opposed to the default TSEA alone. The preliminary results of applying the individual audiogram to the TSEA varied significantly depending on the listener’s hearing loss. Depending on the loss, applying the individual’s personal audiogram to the original TSEA did not always allow for maximum performance on the telephone. If the individual’s hearing loss was closer to normal at certain frequencies than those of the average audiogram, the sound pressure level delivered over the telephone was lower. In general, the closer to normal the subject’s hearing was, the worse they performed with their individual audiogram applied to the TSEA. Also, the preliminary results showed that the default TSEA had better percent improvement than when the individual audiogram was applied to the TSEA. Other factors that were not measured but potentially affected the results included: 1) the participant’s motivation and interest in the test; 2) word recognition ability; and 3) overall communication experience and familiarity with the telephone.