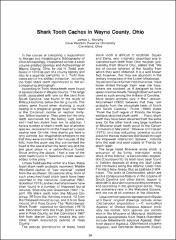 A cache of shark teeth (including Carcharodon, Galeocerdo, Oxyrhina, Ondontaspis, and Carcharias) was recorded by Todd (1910) from the Killbuck Bottoms and from near Orrville, Wayne Co., Ohio. These are believed to represent Hopewellian caches, the only other known examples being from Hopewellian sites in Ross co. and an isolated example from Marion Co. Ultimately they probably derive from Eocene or Miocene deposits along the Gulf Coast or the Atlantic Coast south of Maryland