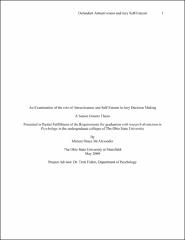 This study looks at how the facial attractiveness of defendants in the judicial system can influence the decisions of the jury. Past research has shown that there are many benefits to being viewed as a more attractive person. One thing that is not as clear is how the traits and personalities of the individual jurors might interact with how they convict and sentence these defendants. Using a survey which includes two faces with different levels of attractiveness as well as scales to measure self-esteem, Social Dominance Orientation, and Global Belief in a Just World, this study was designed to determine if differences in personal attributes of the jurors have any influence or interactions on the decisions they make when also taking into account the facial attractiveness of the defendant. The results indicated that females were more likely to be influenced by attractiveness of the defendant. There was also a marginally significant interaction found between self-esteem and attraction when looking at sentencing. These results show that lower levels of self-esteem are related to participants giving longer sentences. This study also shows that participants scoring higher in Social Dominance Orientation were more likely to give a guilty verdict. Though this study had its limitations, it shows how factors like attractiveness of defendant and personality traits of the juror can influence outcomes in jury trials. The implications that a study like this could have could prove very beneficial in the future when looking at how to bring more objectivity into the courts.