Characterization of the role of pneumococcal beta-galactosidase, BgaA, in adherence 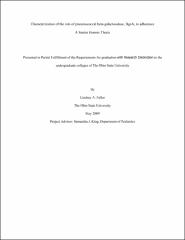 Streptococcus pneumoniae is a major human pathogen that causes over 1.6 million deaths worldwide each year through such diseases as pneumonia, meningitis, and otitis media (1). Adherence of S. pneumoniae to the airway is essential for colonization which is a precursor to disease; however, adherence mechanisms are poorly understood. We discovered a novel mechanism that involves the adherence of beta-galactosidase, BgaA (a sugar-cleaving enzyme) to the epithelial cell surface. Preliminary studies suggest that the epithelial cell receptor for BgaA is a glycosphingolipid. Asialo-GM1, a glycosphingolipid previously proposed as a receptor for S. pneumoniae, was tested as a possible receptor for BgaA; however, the addition of neither purified asialo-GM1 nor anti-asialo-GM1 was able to reduce adherence of S. pneumoniae to epithelial cells, indicating that asialo-GM1 is likely not a receptor for BgaA. When demonstrating clinical relevance of this novel mechanism, some clinical isolates were found to be reduced in adherence after the addition of recombinant BgaA (rBgaA), whereas other clinical isolates were not. Differences in adherence could be attributed to allelic diversity within the gene or differences in enzyme expression, among other possibilities. To determine if allelic diversity may contribute to BgaA-mediated adherence, the gene was sequenced. Predicted amino acid differences were found between two strains reduced in adherence upon the addition of rBgaA and two strains that were not, indicating that these differences could contribute to the ability of BgaA to act as an adhesin. The BgaA alleles were exchanged between strains; however, these mutants did not show an exchange in phenotype, indicating that these sequence differences are not responsible for the ability of BgaA to act as an adhesin. To determine if increased levels of BgaA expression contribute to adherence, beta-galactosidase activity was tested and used as an indicator of possible expression level differences. Strains reduced in adherence upon the addition of rBgaA had higher activity, suggesting increased expression of BgaA. These findings will help to further characterize the BgaA-mediated mechanism of adherence which will help in understanding pneumococcal colonization.