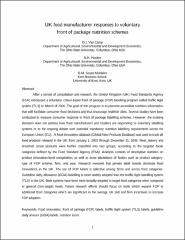 After a period of consultation and research, the United Kingdom (UK) Food Standards Agency (FSA) introduced a voluntary, colour-based front of package (FOP) labelling program called traffic light system (TLS) in March of 2006. The goal of this program is to promote accessible nutrition information that will facilitate consumer food decisions and thus encourage healthier diets. Several studies have been conducted to measure consumer response to front of package labelling schemes. However, the existing literature does not address how food manufacturers and retailers are responding to voluntary labelling systems or to the ongoing debate over potential mandatory nutrition labelling requirements across the European Union (EU). A food innovation database (Global New Products Database) was used to track all food products released in the UK from January 1, 2002 through December 31, 2008. Meal, bakery and breakfast cereal products were further classified into two groups, according to the targeted foods categories defined by the Food Standard Agency (FSA). Analysis consists of descriptive statistics on product innovation-level compilation, as well as cross tabulations of factors such as product category, type of FOP scheme, firm, and year. Research revealed that private label brands dominate food innovations in the UK. The use of FOP labels is selective among firms and across food categories. Guideline daily allowance (GDA) labelling is more widely adopted than the traffic light labelling system (TLS) in the UK. Both systems have been more broadly adopted in target food categories when compared to general (non-target) foods. Future research efforts should focus on tools which expand FOP to additional food categories which are significant in the average UK diet and firm incentives to increase FOP adoption.