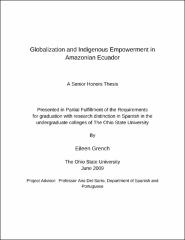 The purpose of my research shall be to examine the role of a globalized economy in the evolution of Amazonian indigenous movements and self representation of the indigenous peoples living there. I will focus on the indigenous groups in the Oriente, Ecuador's Amazon region, which operate under the indigenous organization named CONFENIAE. By reexamining the circumstances under which these populations and their corresponding indigenous organizations have struggled with identity politics and representation, I hope to show how the globalization of their movement has impacted the power relationship which exists between the indigenous community in the Oriente and the Mestizo and European-dominated state system under which they live. I will ask whether the evolution of the different forms of indigenous resistance in the Oriente correlates with the globalized world's interactions within their communities, asking how globalization has influenced/shaped their reactions and why. Currently the Oriente region is stage to some of the most revolutionary methods of indigenous self-empowerment and historical legal battles, where 30,000 native peoples have sued the multinational company they deem responsible for their low quality of life. This has been done with the help of numerous international NGOs, such as its most fervent supporter Amazon Watch, which finance and hire the team of lawyers responsible for the case. This case study gives the project insight into how globalization’s side effects have further permeated the once isolated lives and issues the CONFENIAE indigenous groups have lived through until now.