The Steven Enich Serbian Orthodox Culture Slide Collection
JavaScript is disabled for your browser. Some features of this site may not work without it. 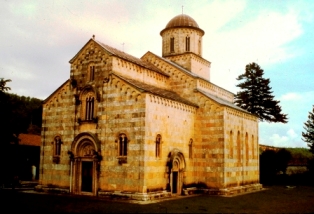 Mr. Steven Enich (04/21/1923 – 10/10/2004) was a prominent Serbian-American lawyer, practicing primarily in Wisconsin. An amateur photographer as well as philanthropist, especially to the Serbian Orthodox cultural heritage, from approximately 1979 to 1994, he was given often unprecedented access to Serbian Orthodox cultural monuments in the former Yugoslavia. In the course of several trips there, he amassed a collection of almost 5,000 slides, the majority of which he took himself. Often, he would share these slides with interested groups, particularly among the Serbian Orthodox communities in the United States.

In 2006, his widow, Mrs. Irene Enich (nee Miller), hoping to ensure "continuing access to and the preservation of" this valuable collection, donated the entire collection and related valuable personal notes of Steven Enich to the Hilandar Research Library, where these visual materials can embellish the largely Eastern (and Serbian) Cyrillic Orthodox manuscripts on microfilm, which this special collection preserves and to which it creates access as the largest such collection in the world.

Notes: 1. There are occasional differences between the original Enich notes and the images. In all such cases, we have attempted to identify, occasionally enhance, and describe the actual content of the slide. Also, the notes refer to a time before the break-up of the former Yugoslavia, and thus geographic and other terms may not always reflect current usage. 2. The place names used to describe the items in this collection came from the photographer's notes, but we have also included a controlled name for each place from the Getty Thesaurus of Geographic Names.

The Hilandar Research Library gratefully acknowledges the generosity of Mrs. Irene Enich, as well as the work of a number of individuals at The Ohio State University Libraries, and especially: Amy L. McCrory, Digital Imaging Technician, OSU Libraries Preservation Department, and Jennifer Breitigan, student assistant to A. McCrory; Melanie B. Schlosser, Metadata Librarian, Scholarly Resources Integration Department; Morag E. Boyd, Metadata Librarian, Special Collections Cataloging Department. In addition, it should be noted that the difficult and time-consuming task of identifying the slides and their contents was divided between Dr. Lyubomira Parpulova Gribble, Assistant Curator of the Hilandar Research Library, and Andrew J. Kier, Graduate Research Associate of the Resource Center for Medieval Slavic Studies.

In honoring Mrs. Enich's wishes, the Hilandar Research Library, through the OSU Libraries and Knowledge Bank, makes images of the vast majority of these slides broadly available through the Knowledge Bank. In addition, the original notes of S. Enich are also available as scanned images. These images may be downloaded for private or academic use; for other use, please contact the Hilandar Research Library (hilandar@osu.edu).