Sub-Saturn planet MOA-2008-BLG-310Lb: Likely to be in the Galactic bulge 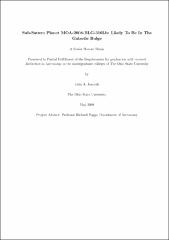 We report the detection of sub-Saturn-mass planet MOA-2008-BLG-310Lb and argue that it is the most likely candidate yet for a bulge planet. Deviations from the single-lens fit are smoothed out by finite-source effects and so are not immediately apparent from the light curve. Nevertheless, we find that a lens model in which the primary has a planetary companion is favored by delta chi-squared of 880. Detailed analysis yields a planet/star mass ratio q = (3.3 ± 0.3) × 10−4 and an angular separation between the planet and star within 10% of the angular Einstein radius. Using color-magnitude data from the source, we are able to constrain the distance to the lens DL to be DL > 6.0 kpc if it is a star (ML > 0.08M⊙). This is the only host discovered so far that must be in the bulge if it is a star. Analysis of the blended light associated with the event (most likely from the lens but possibly a companion to the lens or source) allows us to estimate the mass of the lens, ML = 0.69 ± 0.14M⊙. Within 10 years the lens will be separated from the source by ∼ 54mas. Thus the source of the excess light will likely be detectable by direct observation. At that time, it will be possible to determine unambiguously whether the lens and its planet are in the bulge. Advisor: Richard Pogge