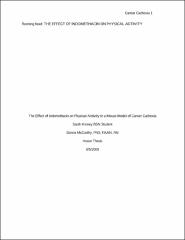 Fatigue decreases the quality of life for patients with cancer cachexia (McCarthy, 2003). Skeletal muscle wasting is a major contributor to the experience of fatigue. Indomethacin, an anti-inflammatory drug, has been shown to reduce skeletal muscle wasting in animal models of cancer cachexia (Hitt, Graves & McCarthy, 2004). The purpose of this study is to determine if indomethacin affects fatigue, measured as voluntary wheel running activity (VWRA) in mice bearing the colon-26 adenocarcinoma (C26). The hypothesis is that VWRA and muscle mass will be maintained in tumor-bearing mice given indomethacin in their food. Mice were divided into 4 groups, which had access to running wheels in their cages. Group 1 received neither tumor cells nor indomethacin, group 2 received indomethacin, group 3 received tumor cells and group 4 received tumor cells and indomethacin. A fifth group did not have access to running wheels and served as a control for the effect of VWRA on muscle mass in tumor-bearing mice. All mice were caged individually and VWRA was electronically monitored for seventeen days. The body weight and muscle weights were analyzed using two way analysis of variance. VWRA was analyzed using two way repeated measures analysis of variance. Tumor mass was analyzed using one way analysis of variance.