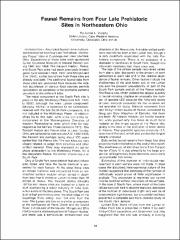 Prehistoric faunal remains from four Whittlesey Phase (Late Prehistoric) sites in northeastern Ohio (Cuyahoga and Lake Co.) are analyzed. Maize agriculture is believed to have been more important at the South Park Site, the Fairport Harbor and Reeve economies being more diffuse, very likely in part due to the proximity of these latter two sites to Lake Erie. The Lyman Site is considered to represent a small but permanently-occupied settlement practicing maize agriculture.