Synergistic function of E2F7 and E2F8 is essential for embryo development 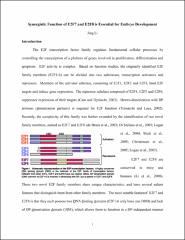 The E2F transcription factor family regulates the fundamental cellular processes by controlling the transcription of a plethora of genes involved in cell cycle progression, differentiation and apoptosis. The complete understanding of the E2F activity became only possible until recently the last two members of this family were indentified, named as E2F7 and E2F8. Unlike the first six family members, E2F7 and E2F8 each possess two DNA-binding domains and therefore are considered as a unique arm of the E2F network. However, as the most recently discovered and least studied E2Fs, the in vivo function of E2F7 and E2F8 remains unknown. In the effort to illustrate the physiological functions E2F7 and E2F8, I targeted and analyzed the consequences of inactivating E2f7 and E2f8 in mice. While loss of either E2f7 or E2f8 did not affect mouse development, their combined ablation resulted in massive apoptosis in the fetus and embryonic lethality by day 11.5. This genetic and functional redundancy could be explained by their identical pattern of expression and their ability to form homo- and hetero-dimers. Consistent with their role in transcriptional repression and the fact that E2f1 is a direct target of E2F7/E2F8, I found that cells deficient for E2f7/E2f8 expressed abnormally high levels of E2f1. These double knockout cells proliferated surprisingly well, but were hypersensitive to DNA damage-induced cell death. Importantly, E2f1 was a physiologically relevant target, since its loss suppressed the massive apoptosis observed in double mutant fetuses. Together, these results identify E2F7 and E2F8 as a unique repressive arm of the E2F network that is critical for fetal cell survival by controlling the E2F1 apoptotic pathway. Interestingly, inactivation of E2f1 failed to prevent the death of E2f7/E2f8 double mutant fetuses, suggesting that apoptosis is not the leading cause of the observed lethality. Utilizing conditional knockout strategies, I demonstrated that placental dysfunction is actually the leading cause. Wild type fetuses supplied with a double mutant placenta were embryonic lethal at day 11.5; whereas, strikingly, double mutant fetuses supplied with a wild type placenta were carried to term. Global gene expression profiling identified a novel transcription program repressed by E2F7/E2F8 that culminates in the control of G1-S and G2-M specific events in the mouse placenta. Disruption of this network in E2f7/E2f8 double mutant placentas incited placental trophoblast cells to undergo ectopic DNA replication and aberrant karyokinesis, and led to severe placental abnormalities. In conclusion, these findings demonstrate placental function of E2F7 and E2F8 is both necessary and sufficient for placenta development and fetal viability. Utilizing a combination of mouse genetics, cell biology, molecular biology and biochemistry approaches, this study clearly provided the first in vivo evidence for the physiological functions of E2f7 and E2f8, and successfully defined the critical cell lineages, cellular processes, molecular pathways affected by E2f7 and E2f8 loss. It, with no doubt, provides a deeper insight into the E2F family factors as well as the placenta biology during embryo development.