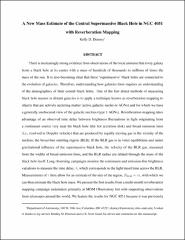 IOP Publishing, to appear in The Astrophysical Journal

There is increasingly strong evidence from observations of the local universe that every galaxy hosts a black hole at its center with a mass of hundreds of thousands to millions of times the mass of the sun.  It is also becoming clear that these supermassive' black holes are connected to the evolution of galaxies. Therefore, understanding how galaxies form requires an understanding of the demographics of their central black holes. One of the few direct methods of measuring black hole masses in distant galaxies is to apply a technique known as reverberation mapping to objects that are actively accreting matter (active galactic nuclei or AGNs) and for which we have a generally unobscured view of the galactic nucleus (type 1 AGNs). Reverberation mapping takes advantage of an observed time delay between brightness fluctuations in light originating from a continuum source very near the black hole (the hot accretion disk) and broad emission lines (i.e., resolved in Doppler velocity) that are produced by rapidly moving gas in the vicinity of the nucleus, the broad-line emitting region (BLR).  If the BLR gas is in virial equilibrium and under gravitational influence of the supermassive black hole, the velocity of the BLR gas, measured from the widths of broad emission lines, and the BLR radius are related through the mass of the black hole itself.  Long observing campaigns monitor the continuum and emission-line brightness variations to measure the time delay, t, which corresponds to the light travel time across the BLR. Measurements of t then allow for an estimate of the size of the region, R_BLR = c*t, with which we can then estimate the black hole mass.  We present the first results from a multi-month reverberation mapping campaign undertaken primarily at MDM Observatory but with supporting observations from telescopes around the world.  We feature the results for NGC 4051 because it was previously found to be a significant outlier from the relationship between the BLR radius and the optical continuum luminosity, the R_BLR-L relationship, found for other AGNs.  We measure a relatively small BLR radius and thus black hole mass for NGC 4051 that would have been impossible for past studies to resolve because the variations were previously undersampled. Our new results indicate that this AGN is actually completely consistent with the R_BLR-L relationship, thus resolving the previous discrepancy and strengthening the evidence for the homologous nature of AGNs --- an exciting interpretation of the tightness of the R_BLR-L relationship, given the diverse demographics of galaxies.