Effects of vibrato production techniques and use on musical collaborations among flutists, oboists, clarinetists, and bassoonists 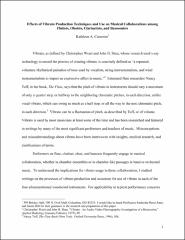 The purpose of this research was to understand how the techniques of vibrato production among four common woodwind instruments might affect collaboration among musicians in ensemble-playing. The methods used for this research included the study and synthesis of print publications and consultations with performers on the instruments. Vibrato usage during modern times, primarily during the late half of the twentieth century and the beginning of the twenty-first century, was the focus. Once the vibrato techniques and typical usage were determined for each of the four instruments, the facts were analyzed to determine the implications for musical collaborations. The occasions in which vibrato is used vary among the four instruments. For flutists, vibrato is so much a part of the sound that some struggle to play without it. Oboists and bassoonists use vibrato to enhance the sound and do not constantly use vibrato. With the clarinet, vibrato is not normally used, so after using none, even a very small amount of vibrato can sound like a lot to the clarinetist. Understanding the typical production techniques and occasions for use of vibrato produces the most satisfying musical performance.