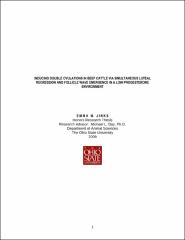 Since cattle are primarily monovular and produce only one calf per year, the cost of production for a cow-calf enterprise lies mostly in maintaining breeding stock. The overall goal in this field of research is to develop a pharmacological method to induce double ovulations in beef cattle and reduce production costs. Our objective was to study the effect of progesterone (P4) concentrations prior to emergence of a new follicular wave on the incidence of double ovulations. On d 0 of the experiment 19 cows received an intravaginal progesterone releasing device (CIDR) along with an estradiol benzoate injection to initiate follicle wave emergence approximately 3.5 d later. Prostaglandin F2α was administered on both d 0 and d 3.5 to establish a low P4 treatment (LP4, n=12) or only on d 3.5 to achieve a high P4 treatment (HP4, n=7). The CIDR were removed on d 3.5. Blood samples were collected from all animals throughout the experiment to measure circulating P4 concentrations. Ovarian structures were monitored via transrectal ultrasonography and ovulation was induced with gonadotropin releasing hormone when the largest follicle measured ≥ 12 mm in diameter. A new wave of follicles was observed in 17 cows and the mean day of follicle wave emergence did not differ between treatments (d 3.7 ± 0.2). Concentrations of P4 in the HP4 treatment were approximately 125% greater than in the LP4 treatment from d 1 through d 3.5. All animals ovulated a single follicle with the exception of one animal in each treatment that ovulated two follicles. The mean follicle diameter at ovulation (11.9 ± 0.3 mm) and mean interval to ovulation (5.7 ± 0.1 d) did not differ between treatments. We conclude that P4 concentrations preceding the emergence of a new follicle wave did not influence the incidence of double ovulations.