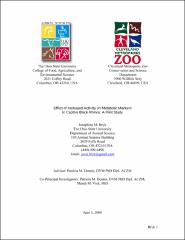 Ex situ (captive) black rhinoceros populations exhibit higher rates of disease than free-ranging counterparts. Preliminary data from an ongoing study supports the association between excessive adipose tissue, iron overload, insulin resistance and increased inflammatory markers in captive animals. This study hypothesizes that an increase in activity level by 30 minutes daily at a moderate activity level for 8 weeks will result in improvement in insulin sensitivity (measured by a decrease in the serum insulin to glucose ratio) and decreased inflammation (measured by TNF-alpha and serum amyloid A). Serum markers of body condition (leptin), inflammation (TNF-alpha, serum amyloid A), insulin sensitivity (insulin, glucose), phosphate and iron stores (ferritin) will further be measured. An adult male and female at the Cleveland Metroparks Zoo are the subjects for this pilot study. ELISA assays have been validated for measuring serum insulin, ferritin, TNF-α, and serum amyloid A in black rhino. These assays were used to assess changes in markers of metabolic status from weekly serum samples collected during 2 weeks of baseline and 10 weeks of increased activity. Methods to increase activity include delaying feeding times by 30 minutes when the subject is already in motion, a call and reward system, playing fetch, and jogging in the yard. The GT1 Actigraph, an accelerometer commonly used in field research, has been used to establish baseline activity levels and measured activity levels during the ten week interval of increased exercise. Our studies demonstrated a significant (P<0.001) increase in activity level above baseline in both the male and female black rhino. Serum metabolic markers indicate decreases in inflammation and iron stores, with no significant changes in insulin sensitivity.