Variation in the Chemical Composition of Crude Glycerin 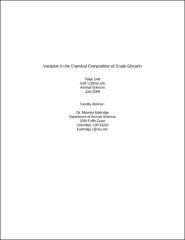