Predator-Prey Interaction between Largemouth Bass and Bluegills as Influenced by Simulated, Submersed Vegetation 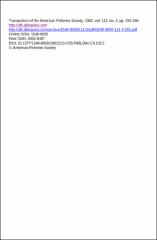 Savino, Jacqueline F.; Stein, Roy A. "Predator-Prey Interaction between Largemouth Bass and Bluegills as Influenced by Simulated, Submersed Vegetation," Transactions of the American Fisheries Society, v. 111, no. 3, May, 1982, pp. 255-266.

Data from the literature suggest that predatory success declines as habitat complexity increases. To explain this phenomenon, we studied the predator-prey interaction between largemouth bass Micropterus salmoides and bluegills Lepomis macrochirus in four laboratory pools (2.4-3.0 m diameter, 0.7 m deep), each with a different density (0, 50, 250, 1,000 stems/m2) of artificial plant stems. Behavior was quantified for both predator and prey during largemouth bass feeding bouts lasting 60 minutes. Predation success(number of captures) by largemouth bass was similar at 0 and 50 stems/m2, then declined to near zero at 250 and 1,000 stems/m2. As stem density increased, predator activity declined due to a decrease in behaviors associated with visual contact with prey. Reduced predation success by largemouth bass in habitats of increased complexity apparently is related to increases in visual barriers provided by plant stems as well as to adaptive changes in bluegill behavior.

This research was supported in part by funds from the Federal Aid in Fish Restoration Act under Dingell-Johnson Project F-57-R, the National Science Foundation (DEB77- 16167), and the Department of Zoology.