Selective Predation by Three Esocids: The Role of Prey Behavior and Morphology 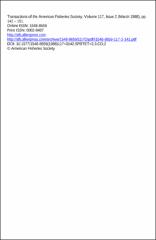 We documented differential vulnerability of fathead minnows Pimephales promelas, gizzard shad Dorosoma cepedianum. and bluegills Lepomis macrochirus to predation by muskellunge Esox masquinongy. northern pike E. lucius. and tiger muskellunge E. masquinongy x E. lucius in a 700-L tank. Individual esocids (150-225 mm in total length) were combined with single species groups (N = 15) of optimal-sized prey (25-30% of predator length for bluegills, 37-43% for fathead minnows, and 30-36% for gizzard shad). Capture ability did not differ among esocids; however, mean captures per strike were higher for fathead minnow (0.67) and gizzard shad (0.78) than for bluegill (0.14). Morphology and antipredatory behavior, unique to each prey species, contributed to this differential vulnerability. In the field, we introduced equal numbers and similar sizes of these esocids into two systems, one with centrarchid prey and one with both centrarchid and gizzard shad prey. As predicted from laboratory work, esocids ate fewer prey and grew more slowly when centrarchids were the only prey than they did when gizzard were available. In a third reservoir, containing bluegills and gizzard shad, esocids strongly preferred gizzard shad over bluegills. To maximize growth and survival, esocids should be stocked in systems with soft-rayed or fusiform prey, such as cyprinids or shad, rather than in centrarchid-dominated systems.

This study was supported in part by funds from the Federal Aid in Fish Restoration Act under project F-57-R.