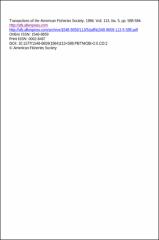 Many pellet-reared tiger muskellunge (F1 hybrid of female muskellunge Esox masquinongy and male northern pike E. lucius) do not survive stocking in reservoirs dominated by bluegill Lepomis macrochirus prey. Poor survival may occur because few hybrids capture bluegills. In a previous study done in hatchery ponds, only 10% of naive hybrids (those never before exposed to live prey) captured bluegills during 15 days. In similar ponds, we tested the effects of predator experience (using hybrids previously exposed to bluegill prey), vegetative cover, and bluegill density on the number of hybrids capturing prey. Few experienced or naive hybrids captured bluegills at low prey density, regardless of the presence or absence of vegetation. When bluegill density was increased from 1 to 5 prey/m2 in ponds or to 40/m2 in aquaria, many hybrids captured bluegills. Our pond study suggests that most hybrids will not fare well when stocked in lakes where only bluegill forage is present.

This research was supported in part by funds from the Federal Aid in Fish Restoration Act under Dingell-Johnson Project F-57-R.